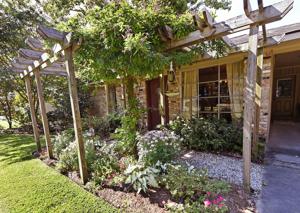 There’s a medley of plants she knows, plants she’s trying and plants that make her happy.

“Being a generalist, I like a little bit of everything,” she said.

Creed said she loves to experiment with new varieties, and can always find a spot for a beautiful, interesting or unusual plant. Her favorites are the Super Plants recommended by the LSU AgCenter every year.

“These are tried and true for our area,” said Creed, a staff member of the Friends of the LSU AgCenter Botanic Gardens at Burden.

When she moved to her Highland Hills home in 2011, the front was nondescript and the back was all grass except for a large sycamore and an aging fig tree.

Creed knew a little landscaping could make a huge difference, so she called on her cousin, Leslie Beard, an interior designer who now lives in Auburn, Alabama, to design an arbor for the front entrance.

Landscaper Josh Williams brought the design to life, and now the arbor is lush with evergreen wisteria. Creed also removed the “skinny” concrete sidewalk under the arbor and filled the area with gravel around which she designed a bed for blooming plants.

“I wanted to create interest in a small enough space to change out seasonally with some bang for not too much buck,” she said.

At the street side of her driveway, Creed planted a cherry tree as an homage to Highland Road-area gardener Julia Hawkins, now 103.

Hawkins, Creed said, “would come down the street pulling a wagon with a Taiwan cherry tree to welcome every new resident of her neighborhood.”

Creed’s thriving cherry tree, which blooms at the end of winter, is surrounded by purple Louisiana irises and buddleia, the butterfly bush, which attracts butterflies and hummingbirds.

“When I drive up to my house, that cherry tree makes me happy,” she said.

Creed also has a large butterfly bush in her backyard growing on a trellis that belonged to her mother, the late Helen Roberts.

“The butterfly bush has pretty yellow flowers, but the cool thing about the plant is the seedpod, which is shaped like a butterfly,” she said. “We saved those ‘butterflies’ for a long time and tossed them at my daughter’s wedding.”

In the backyard, a flower bed surrounds her patio and plantings front a wooden fence at the perimeter of the yard. A loquat tree, two bay laurels, Super Plant coleus and a sweet bay magnolia grow along one side of the yard.

“When I planted the magnolia, it didn’t come up to the fence, but its roots got happy,” she said. “You have to be patient with plants.”

Many of her plants are in shades of blue and purple, but she always has something yellow blooming so she can make purple and gold arrangements in her home, especially during LSU football season.

One “hodge-podgey” section of her garden is planted to attract pollinators with blooming plants like pentas, porterweed and ageratum.

“It’s my attempt at being more environmentally sensitive,” she said.

Creed came to gardening after working for 15 years in banking. That’s when she discovered the Master Gardener program at the LSU AgCenter and attended classes for the home gardener, many conducted by LSU professors, one day a week for six months.

“Once you finished, you were expected to volunteer to spread the word,” she said.

“While my kids were at soccer practice, I would work in the iris and daylily beds there,” she said.

Her volunteer work at the Botanic Gardens at Burden led to her part-time job with the Friends organization, which was started with $200 and 32 avid Burden supporters.

“People realized that Burden was such a treasure, but it needed help with 400 acres to maintain,” Creed said. “The Friends is a group of people who really appreciate the Burden gardens.”

Handmade
Store Indya brings you an earthy maroon prep bowl, which is uniquely designed with a rustic look and feel. It is handy and can...

When it comes to gardening, Ginger Ford is the queen of...

With this many levels, this contemporary Baton Rouge home is a...