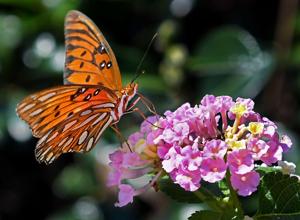 Carol Juban knew she had a problem when the only things growing really well in her yard were weeds. And they were thriving.

“Things were out of control,” said Juban of the unwanted plants infiltrating the grass, the ground cover and the flower beds.

That’s when she sent an SOS to landscaper Darren Boudreaux, a family friend who had helped her with a few yard projects in the past.

“That opened up the whole yard,” Juban said. “I could actually see the weeds so we could get them out.”

Next, out came the old, weed-infested liriope, which bordered almost all of the beds in the 1½-acre yard. Boudreaux planted masses of blue daze with a showy blue flower.

“If we have a hard freeze, the blue daze will die back but it will usually come back in the spring,” Juban said.

It took two years, but Juban and Boudreaux working together revamped the entire yard.

Boudreaux kept the basic plan of the yard, which had been landscaped after Carol Juban and husband Kenny, majority owner of Juban’s and overseer of several other family restaurants, built the home and moved there in 1989.

In the backyard, there’s a covered porch and a centered brick walkway that leads down to the pool, which is now surrounded by three flower beds planted with blue daze, masses of roses, red ruffles azaleas and a few pots of blooming lantana.

Behind the pool had been a wisteria-covered arbor, but Hurricane Gustav lifted it up, posts and all, and moved it several feet.

“We decided that we liked the open yard, so we never put it back,” Juban said.

The couple added a patio — removing four ugly crape myrtles — when they renovated and expanded their keeping area off their kitchen in 2016.

The entire backyard is surrounded by a wooden fence fronted by lush plantings, and at the rear with two live oaks, a water oak, two Drake elms, cypress and tall pine trees.

This area of the yard, which the Juban grandchildren called “the jungle,” had been filled with tall azaleas.

Juban said she came home one day to find that Boudreaux had trimmed the azaleas into 3-foot-tall sticks.

“I couldn’t believe it, but they all came back so much better,” she said. “Darren said that if things get too tall, the big inner part doesn’t get enough sun and will wither.”

Interspersed among the trees and azaleas are different varieties of hydrangea, ginger, ferns, giant elephant ears, night blooming cereus and plants moved from other parts of the yard that thrive in the natural setting.

“Every plant was made use of,” Juban said. “Sometimes all I have to do is throw something back there and it will grow.”

On the west side of the backyard and extending to the front is the area Juban calls her “little piece of paradise,” a small garden partially shaded by a maple tree and centered with a boulder.

“Every bed in the yard has a boulder. Darren added boulders to give a natural perspective,” said Juban, who came to gardening later in life.

About three years ago, she retired after a 22-year teaching career followed by years working at Juban’s.

The yard, she said, is her joy. She loves sitting on her patio watching the birds and butterflies.

“The bees may be disappearing in other places, but not here,” she said. “We have more butterflies and bees than we have ever had.”

How to lash legs for bamboo furniture

How to paint furniture Fast and Easy, less steps, no wax or prime needed!

Handmade
Showcase your style with this rustic-chic industrial shelf set. This set of two industrial shelves has heavy duty brackets that are designed and made...

Daylily tour set for May 12

How does your garden grow? For the Horcasitas family, in their...