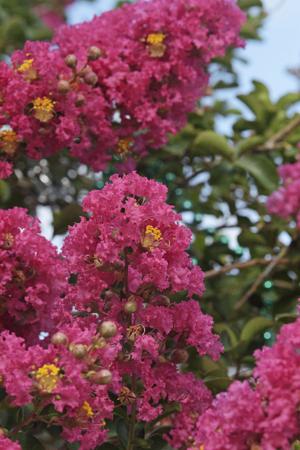 Crape myrtles are likely our most popular flowering tree.

They beautifully line neighborhoods with colorful blooms throughout the hottest months.

While the flowers are stunning, the reddish tones of the bark and sculptural quality of the trunk forms also carry year-round visual appeal.

Flowers are delicate, poised on the tips of the branches, in white and pinks, light and dark purples, reds and magenta.

Crape myrtles bloom from June through the early fall, with peak blooms typically occurring early in the season. With few issues, crape myrtles offer bees and other pollinators a bounty of pollen to forage.

Crape myrtles are hardy in Louisiana and are typically considered a low-maintenance tree. Fertilizing yearly with a little 8-8-8 or 13-13-13 keeps them in good condition nutritionally.

Pruning should be accomplished in late winter, taking care to not decapitate the tree.

Planting crape myrtles is relatively easy and should be done in the fall or winter. Many local garden centers are selling crape myrtles in pots, but this really is not the best time to be planting them. Resist the temptation to plant now, but if you do, baby them through the summer months, watering often. Planting in the summer will stress the young trees, which will not have fully developed root systems.

When you plant, choose sunny locations with well-drained soil. If planted in the shade, crape myrtles will not flower as much. Trees planted in the shade also may fall prey to Cecrospora leaf spot, which is harmless but causes unsightly discoloration of the leaves.

Crape myrtles may attract the attention of a few different insects, some good and some bad. This time of year, bark lice are active, as well as the relatively new crape myrtle bark scale.

This scale insect feeds on the sap of crape myrtles and excretes a honeydew substance that can attract ants and feed the development of black sooty mold. Bark scale insects appear as waxy grayish-white bumps covering the branches and twigs.

Recommendations for controlling this issue are still under development, but many insecticides are not fully effective because of the scale’s hard outer exoskeleton.

Washing them off with a mild dish soap and water has been shown to help. Horticultural oils don’t accomplish much, but applications of dormant oil in the winter can help to keep populations down.

Systemic insecticides applied to the root zone in May and July can target the “crawler” stage, or the life stage where the scale is the most vulnerable. Orthene (acephate) or Merit (imidacloprid) applied to heavily infested branches can help as well. Although not fatal, crape myrtle bark scale can be unsightly and cause some noticeable decline of the trees.

Crape myrtles are generally hardy and easy to care for, with most of the care not taking place in the summer months, when the floral display is at its peak. For the time being, sit back and enjoy the color and charm of our most popular Southern landscape tree.

Shark Tank I Do Not Trust You 5 Minute Furniture

Furniture
The foam sheets are made from low-density polyethylene making them lightweight, flexible and strong. The foam is non-abrasive to ensure that none of your...

Tropical plants don’t have to be tacky

Garden News: Timing is everything when it comes planting

Lauren Grossman's first home is one big do-it-yourself project, and she...