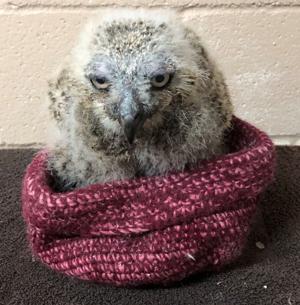 Editor’s note: This is an occasional series from the Louisiana Master Naturalists of Greater Baton Rouge.

March is peak breeding season for wildlife in Louisiana, and during this baby boom, people frequently find baby animals that fall from trees or mysteriously appear and assume they’ve been orphaned.

Although it’s tempting to act fast, it’s best not to rush to the rescue, said Melissa Collins, wildlife biologist and permits coordinator with the Louisiana Department of Wildlife and Fisheries.

Before acting, she said, ask: “Is the baby animal hurt or sick? Is there bleeding, shivering, vomiting? Was it attacked by a cat or dog, or are the bird’s wings broken or drooping unevenly?”

Unless the answer is yes to one of these, she said, it’s best to leave the animal alone and watch it from afar.

“Babies are not usually far from their mom, whether it’s a nest or den site,” Collins said.

Some animals, like deer and rabbits, leave their young for long periods of time, while others, such as raccoons, closely supervise them.

Collins said if you find a bird out of the nest, if possible, try to put it into the nest. Wear gloves for your protection, she added.

“It’s a myth that parent birds will abandon babies if they’ve been touched, but you don’t know what diseases they may have or what germs you could give them, so wearing gloves is important,” Collins said.

Do not rescue wildlife and then try to keep it as a pet. State and federal laws protect nearly all wild mammals and birds. It is against the law to possess the animal or bird or their nests, feathers or eggs without a special permit, Collins said. The animal must be turned over to a licensed rehabilitator or Wildlife and Fisheries as soon as possible.

Collins offered these tips for dealing with wildlife in apparent need of rescue:

To locate a permitted wildlife rehabilitator in the area or to become one, visit wlf.louisiana.gov/wildlife-rehabilitation-program for information. Call Wildlife and Fisheries at (225) 763-8584 or toll-free at (800) 442-2511.

How to create Shabby Chic furniture

Garden News: Been wanting a pecan tree? Now's the time to...