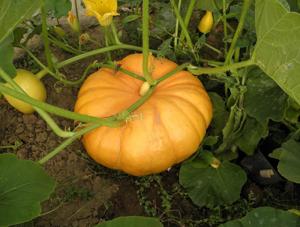 Have you ever grown your own jack-o’-lantern?

By the time Halloween rolls around, it is far too late to plant your own pumpkin patch. Now, however, is the perfect time to plant seeds that will have you carving at the end of October. Actually, pumpkins seeds can be planted any time from mid-March through July.

Pumpkin seeds, along with other cucurbit seeds such as watermelon, cucumber and squash, can be sowed directly into the soil, but you may find transplants at local independent garden centers in south Louisiana.

If you have ever grown winter squash successfully, then you are already ahead of the game. The two vegetables are very similar, except pumpkins tend to have stronger, more coarse flesh.

Because of our climate, growing pumpkins is going to take some work. Hot, humid weather gives rise to disease and insects, making it hard for pumpkin plants to thrive.

Pumpkin seed will typically take four to seven days to germinate. Once they have, be on the lookout for the squash vine borer.

This insect can be very destructive to pumpkins and squash planted this time of year. The borer is a grub-like caterpillar that burrows into the stem and devours the inside, causing the plant to wilt and die. If you’ve had problems in the past, treat plants regularly with Sevin or BT to control the pest.

If you are planting specifically for carving-type Halloween pumpkins, then consider the following varieties:

Pumpkins are a vining crop and will need room to grow, so clear out a small section of the backyard and get your carving pumpkins in the ground by the end of the month.

As much as kids love carving faces into the pumpkins, they will enjoy watching them grow and harvesting them just as much.

A furniture maker builds her life’s own success

Video
To repair furniture, drill into a dowel that mends a stripped hole to create a new setting for a double-headed screw. Drill a hole...

The Cammarosano's kitchen has them ready to host any big event...