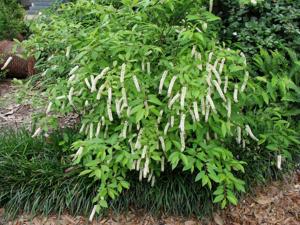 Over the past few decades, gardeners have become more environmentally conscious, using less pesticides, composting more and installing rain gardens. They also have changed what they plant, incorporating more pollinator-friendly plants as well as native species into the landscape.

Virginia willow, also called Virginia sweetspire and known botanically as Itea virginica, is one of the more popular native shrubs in Louisiana. Interest in this shrub has increased in the past 10 to 20 years with the use of the variety Henry’s Garnet.

The Louisiana Super Plants program is an educational and marketing campaign of the LSU AgCenter that highlights tough and beautiful plants that perform well in Louisiana landscapes. These plants have a proven track record, are university tested and industry approved.

The intoxicating smell of the Henry’s Garnet Virginia willow flowers is a major feature of this native shrub. These white flowers are borne on 4- to 5-inch clusters, and the shrub will bloom for a four to six weeks in spring, starting roughly about the time azaleas finish up. The flowers stand out remarkably next to the lush, dark green foliage.

Henry’s Garnet Virginia willow is a lower-growing shrub, topping out at 5 feet tall while having an equal spread. Sometimes the plants can be slightly wider than tall due to its clump-forming growth. Prune any undesirable growth in spring after flowering is completed. Avoid pruning in winter or early spring as this will inhibit flower production the following spring.

Foliage of Henry’s Garnet Virginia willow is especially handsome in fall. The leaves turn a brilliant deep red-purple and persist late into the fall. Plants are deciduous in some areas but are semievergreen in our area, retaining some foliage all year.

This plant tolerates Louisiana’s wet and heavy soils but also performs well in drier sites. It is frequently found in the wild in locations that have moist soil. Henry’s Garnet is being used in rain gardens in commercial landscapes around the state.

The shrub is adapted to a wide range of soil pH and can adapt to almost any soil type or drainage situation in a landscape. Even though it prefers a slightly moist soil, it is very drought-tolerant. Morning sun with afternoon shade is a nice planting location.

Fertilize once annually with a 3- to 4-month slow-release fertilizer. It is best to apply fertilizer in late winter just prior to new growth or in mid- to late spring after flowering.

How to Secure Heavy Furniture for an Earthquake