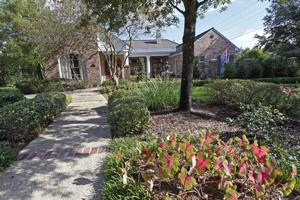 For Jerry and Donna Jolly, outside living space is just as important as those inside their home.

It starts out front, when an enclosed courtyard fronts the couple’s Jefferson Place-Bocage home, and ends in the backyard oasis.

“I do the indoor cooking, but Jerry does the outdoor cooking,” Donna Jolly said. “We use the backyard a lot when we have parties.”

The interior of their home is just as comfortable, with views that take in the outdoors, which is maintained by landscaper Jamie Varnado.

“The design of the house is like an ‘H’,” Donna Jolly explained. “The bedroom wing is on the right and the working wing is on the left with the living room connecting the two parts.”

The living room looks out on to the front courtyard and the backyard, with large windows that allow the light to pour in.

On the “working” side of the house is the kitchen/keeping room, dining room, study, laundry room and a full bath accessible from the swimming pool.

The dining room’s heart of pine floors are set off by the deep bronze paint on the walls and bronze and bittersweet drapes in a modern floral pattern. It’s the only truly formal room in the house.

The kitchen and keeping room are warmed by cypress cabinets and brick floors, and given room to breathe with exposed cypress beam ceilings. While open to the living room, the space is separate.

“Everybody is always in this room, but we can sit in here and see the next room,” Donna Jolly said.

The large kitchen island, perfecting for entertaining, also has a built-in television that faces the seating area.

In a corner between the two areas is a table for four.

“If we need to seat more, we have the dining room,” she said.

A stairway leads to the second floor with two bedrooms, a bath and a gallery overlooking the backyard area. Donna Jolly recently redid one of the two bedrooms with touches reminiscent of the family’s Perdido Key condo. The pale blue walls and a bed covering by Houston designer Karen Fortier, the aunt of the Jollys’ daughter-in-law, give the room an in-home getaway feel.

“We wanted to bring a little of Perdido home,” Donna Jolly said.

When the Jollys were designing their home, they called on family members to help. Brother-in-law Herschel Hoffpauir was the architect who came up with the design. “Jerry’s cousin Cary Kearny, who is a designer, and I sat down at our dining room table and came up with the decorating details,” Donna Jolly said.

Contractor Newt Ogden completed the house in time for the Jollys to move in and have a big family barbecue on July 4, 2000.

Other than the addition of Jerry Jolly’s barbecue area about two years ago, the couple has made very few changes to their home. It’s just about perfect — inside and out.

Catatonia- Part Of The Furniture

Shark Tank I Do Not Trust You 5 Minute Furniture

The New Lightness in Furniture Construction: Chipboards of Kaurit Light by...

Video
BASF has developed a technology for an innovative wood-based material with the potential to revolutionize the furniture market: Kaurit® Light. Wood-based ...

'Can' Brown brings Mardi Gras to the Southdowns corner where she...