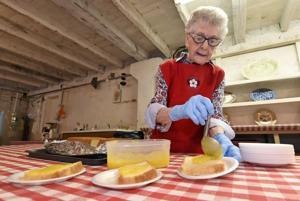 JACKSON — Some come for the antiques. For others, it’s the art or maybe the bucolic old homes and churches.

But for a lot of folks, the biggest draw is the Gumbo Kitchen.

Each year hundreds of people head to the Jackson Assembly’s Antiques and Art Show and Sale, perhaps drawn by the aroma of that gumbo or the sweet smell of Mary Louise Bankston’s “famous” pound cake.

“A bunch of little old ladies do the cooking,” said Jan Worthy, who for years has worked on the three-day show that funds historic preservation projects in Jackson.

This year’s show, March 29-31, is spotlighting the McKowen Store, site of the Gumbo Kitchen.

The old store was probably built around 1836 by Ansel Neafus, who rammed the lower half into an existing hillside and made the second story level with the top of the hill. The late Marcelle Reese “Nootsie” Couhig, one of the founders of the Jackson Assembly, called the building “early split level.”

Purchased by John McKowen in 1838, the building served as a trading post for the plantations in the area and had a large vault to hold money before Jackson had a bank. The building had one very famous visitor for an extended period when aviator Charles Lindbergh on a barnstorming trip around the country broke a propeller in a nearby field. Lindbergh brought his plane into the first floor of the store, where mechanics worked to repair the damage.

The building remained in the McKowen family until the early 20th century and was bought and restored by the Jackson Assembly in 1966.

Couhig called the first meeting of the Jackson Assembly in 1962. Her goal, according to early records, was to “restore, embellish and promote the town of Jackson.”

“Nootsie Couhig just railroaded it. She said we had so many nice buildings. She said we could be another Williamsburg,” said Mary Woodyear, whose mother, Olivia Dudley Acosta, was one of the founders of the antiques show, now in its 54th year. Woodyear is president of the Jackson Assembly and co-chairman of the show with Gayle Macdiarmid.

In the early days of the show, members made the gumbo every day, along with fresh pimento cheese and chicken salad sandwiches, vegetable soup, potato salad and chili.

The women still make almost all of the food fresh each day, but now the shrimp and okra gumbo is made by Charles Lanoue, who begins the first week in March and freezes it in gallon buckets. He uses 200 pounds of peeled shrimp and 60 to 70 pounds of okra to make 100 to 125 gallons of gumbo each year.

Claudia Bankston Connell and Martha Butler Harvey were two of the early kitchen chairwomen. Their pictures hang in the Gumbo Kitchen.

“They used to grow the stuff they used in the gumbo, but they didn’t cook the quantity we do now,” Lanoue said. “They never gave me the recipe, just the list of ingredients, but I try to make the gumbo taste the same as theirs did.”

Pauline Rushing and Carla Canfield now chair the kitchen with Mary Louise Bankston, who has been involved with the project since the beginning, in charge of cakes and pies. There is even a special candy and cookie counter, where a line forms for the “famous” pralines.

“We have 30 pies every day and 80 to 90 cakes for the show,” Bankston said. “We get desserts only from people we know are good cooks.”

With proceeds from the Antiques and Art Show and Sale, the Jackson Assembly has purchased and restored three other buildings — the Johnny Jones Store, the old Feliciana Courthouse and the Pipes-McKowen Building, where the antiques sale will be held.

The Gumbo Kitchen is on the lower level of the McKowen Store, while the art show and sale are upstairs in the Charter Street Studios, a cooperative art studio founded in 2009 with the assistance of the Jackson Assembly. Donna Kilbourne, Alice Kent and Frances Durham serve on the artist committee.

The women who run the Gumbo Kitchen have done it for so many years, that it’s almost second nature.

“We have a good time,” Rushing said. “If we get stressed, we just start eating.”

Event features antiques and collectibles from dealers across the South in two historic buildings salvaged with proceeds from past shows.

WHERE: Locations around Jackson, including the Pipes-McKowen Building (antiques) and the 1835 McKowen store (Gumbo Kitchen and art)

TOURS: The Feliciana Courthouse and three historic churches will be open. The Baton Rouge Model Railroaders will give demonstrations of steam model locomotives and indoor and outdoor electric trains on Friday from 11 a.m. to 3 p.m. and Saturday from 10 a.m. to 3 p.m. at the Republic of West Florida Museum, 3406 College St.

SPECIAL EVENT: Samuel C. Hyde Jr., Leon Ford Professor of History at Southeastern Louisiana University, will present his book, “Pistols and Politics: Feuds, Factions and the Struggle for Order in Louisiana’s Florida Parishes, 1810-1835,” on Saturday at 11 a.m. in the Jackson United Methodist Church.

Garden News: How to care for your holiday cactus

Daylily garden tour set for May 11