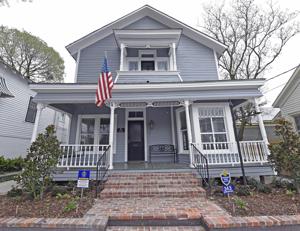 Elyse and Travis DeBenedetto knew they had one of the great old Beauregard Town houses, but it took a while to find out just how special it is.

It was only when they were doing the demolition work in preparation for a major renovation on what is known as the “Rex House” (more about that later) that the couple realized what a treasury of construction history the home actually was.

In seven months of tear-out, they found 170 years of “dirt and dust” along with layers and layers of plaster, cheesecloth, wallpaper, beadboard, paneling, tile and Sheetrock — sometimes all on the same wall.

The DeBenedettos, who both grew up in the area, actually live in Houston, but they have lots of family in Baton Rouge. In recent years, Elyse DeBenedetto has spent weeks at a time here, living in hotels and working with local clients in her IT consulting business, OneVision. One day, while driving through Beauregard Town, Baton Rouge’s second oldest neighborhood, she discovered a rambling red house with a “for sale” sign in the front yard.

The attorney who used the house for his office was ready to move to something with more parking, and Elyse DeBenedetto was ready to find a place to unpack her suitcase.

She knew renovating the home would be a major project.

“My husband told me I was out of my mind,” she recalled.

The house was built in 1849, originally with no kitchen and no bathrooms.

“It was built as a square box with four rooms,” she said.

Over the years, it had been through multiple renovations including a major one in 1910, when a second story and a kitchen were added.

The DeBenedettos purchased the house in October 2017 and worked every weekend until they turned the project over to a contractor in May 2018. They took the house apart board by board. They saved everything — shiplap, beadboard and doors. Some of the things they used in the renovation. Other items they saved for a house they are planning to build in the future.

Working with architect Lionel Bailey, the DeBenedettos completely redid the house, keeping some traditional elements and using others in a more modern way.

“We didn’t leave anything untouched — the electrical, plumbing, HVAC,” Elyse DeBenedetto said. “We had to tear out the whole back because of termite damage.”

What the couple ended up with is a home the DeBenedettos can use when they are in town but with doors that separate the rooms so the house can be rented as a one-, two- or three-bedroom Airbnb destination.

The home had its quirks.

When the couple bought it, the downstairs bathroom opened to the dining room.

“You used to be able to sit on the toilet and face your guests in the dining room,” Elyse DeBenedetto said with a laugh.

The door has been plastered over and the bathroom turned and expanded to serve the downstairs bedroom.

They also discovered that at one point, part of the ceiling had been lowered to eight feet. When they removed the plaster ceiling in the laundry room, which was probably an original back porch, the room had the same 12-foot ceilings as the rest of the house.

The house, now painted a soothing blue, opens to the receiving room where the 1910 staircase takes a 90-degree angle to the right.

Upstairs, the DeBenedettos removed a wall between two bedrooms to create a large master bedroom and converted a smaller bedroom into the master bath and closets.

In their months of work on the house, the DeBenedettos solved many of the mysteries of its multi-layer construction, but could never figure out why everyone in Beauregard Town called it the Rex House. Did it have something to do with Mardi Gras? Had it belonged to someone connected to royalty, Elyse DeBenedetto wondered?

Finally, she posted a query on Facebook and within a day, a woman called with the answer. The house at one time belonged to her grandmother, Delores Rex.

How to Mod Podge Furniture

Removing Rust from Garden Furniture: Contoured Surfaces with the Dremel 8200

Home Toys
The perfect box for all sewing supply storage needs. Holds up to 30 bobbins in a removal tray, features a magnetic strip for pins...

Herb Society to present program on hemp and marijuana